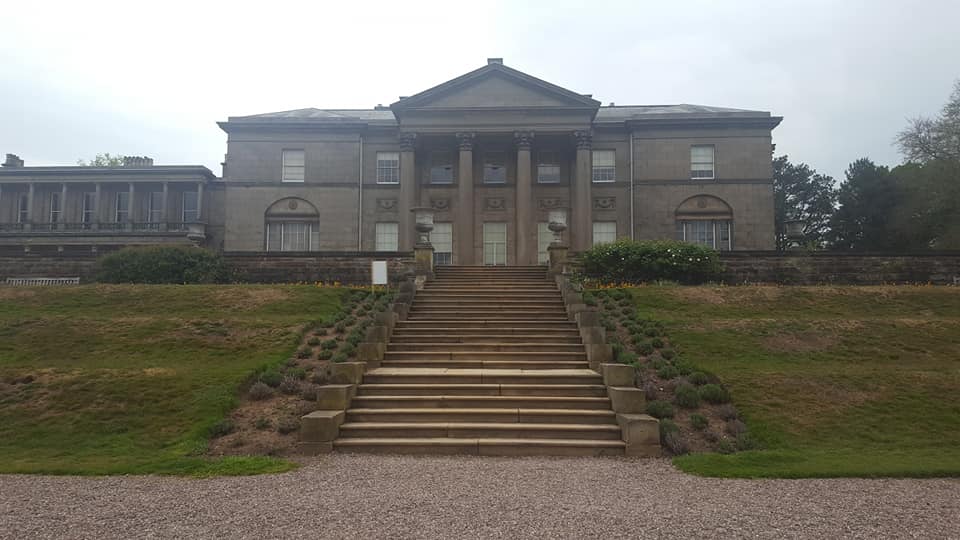 Tatton Park is a historic hall and gardens located in Cheshire.

The mansion is surrounded by over 1000 acres of a landscaped deer park, 50 acres of gardens, a farm and an array of vegetable gardens which still provide food to the estate.

The walled kitchen garden, including all the glasshouses, have been restored to working order. This garden has remained loyal to the traditional Edwardian way of growing fruits and vegetables.

Runner beans, potatoes and lettuce are some of the varieties that are still being grown today from a forgotten era.

The produce from the garden can be purchased from the farm shop.

Sir Thomas Egerton purchased this estate in 1598. Although the Egerton family had ownership of the estate, the old medieval hall was rented out to tenants. It took until 1716 when John, the great-great-grandson of Sir Thomas, built the first mansion on the land that the family actually resided on the estate.

It was John’s son Samuel that made renovations, including the completion of the dining room.

Exhibited in the dining room is a Minton dessert service in the Sèvres style that was purchased in 1865.

In the 1770’s Samuel asked architect Samuel Wyatt to build a completely new Neo-Classical mansion on the land, this didn’t get completed until 1791, after Samuel Egerton’s death.

Lewis William Wyatt, the nephew of Samuel was responsible for the purchase of the vast array of paintings.

In the 1860’s more alterations were made to the mansion, including an upper floor added to the family wing and another entrance way.

In 1958, Maurice Egerton, the last lord of the manor, donated the house to the National Trust after his death.

View of the Italian terrace from the mansion.

The Italian gardens were designed by Joseph Paxton in 1890 and they received restoration in 1986 and 2010.

The recreation and leisure gardens are known as the pleasure grounds. They include Charlotte’s Garden, the Rose Garden, the Maze, the Tower Garden, the Topiary, The Choragic Monument, the African Hut and the Arboretum.

The gazebo from Charlotte’s garden.

Charlotte’s garden was named after Lady Charlotte Egerton, wife of William Egerton. It was designed in 1814 by Lewis Wyatt. This was the first formal garden designed with small flower beds of single plants.

The Choragic Monument is a copy of the Temple of Lysicrates in Athens. It was built in 1840 by Wilbraham Egerton.

There are over 300 species of trees in the garden. The Egerton family started this collection in 1795 which includes rare species from China, Japan and North America.

The Japanese garden was inspired by an Anglo-Japanese Exhibition at the White City in London in 1910 where Alan de Tatton visited.

The garden was constructed by Japanese men with artefacts brought back from Japan. It’s the style of a Tea garden, including a Shinto shrine, a bridge over the Golden Brook and white stones that represent a snow-capped Mount Fuji with balance brought from the well-placed plants and rocks to create harmony with nature. There are Japanese Maples, Acers, bamboo and evergreens with the focus on strict pruning techniques.

The glass houses were built around the 1750’s. Used to grow pineapples, figs, apricots grapes, peaches and nectarines.

Alongside the pinery is the fernery. This was built by Joseph Paxton in 1850. It has an extensive collection of ferns, some of which were brought back from as far as Australia and New Zealand.

This site uses Akismet to reduce spam. Learn how your comment data is processed.

Ghost stories from Samlesbury Hall.
It's a nice sunny day 🌞
Ghost stories, witches and a little history on Samlesbury Hall posted in my blog.
Happy March 🌱🌸🌻🌹🌷
I just wanted to watch baseball and forget about the world for three hours.
We're all full of germs all the time, that doesn't make us walking disease vectors though.
There is a massive energy shift, does anyone else feel it?
Not for putting yourself in.
Stop buying on Amazon, stop using their services, cancel your subscription. They are a part of the elite circle.
Loading Comments...
Comment
×
%d bloggers like this: